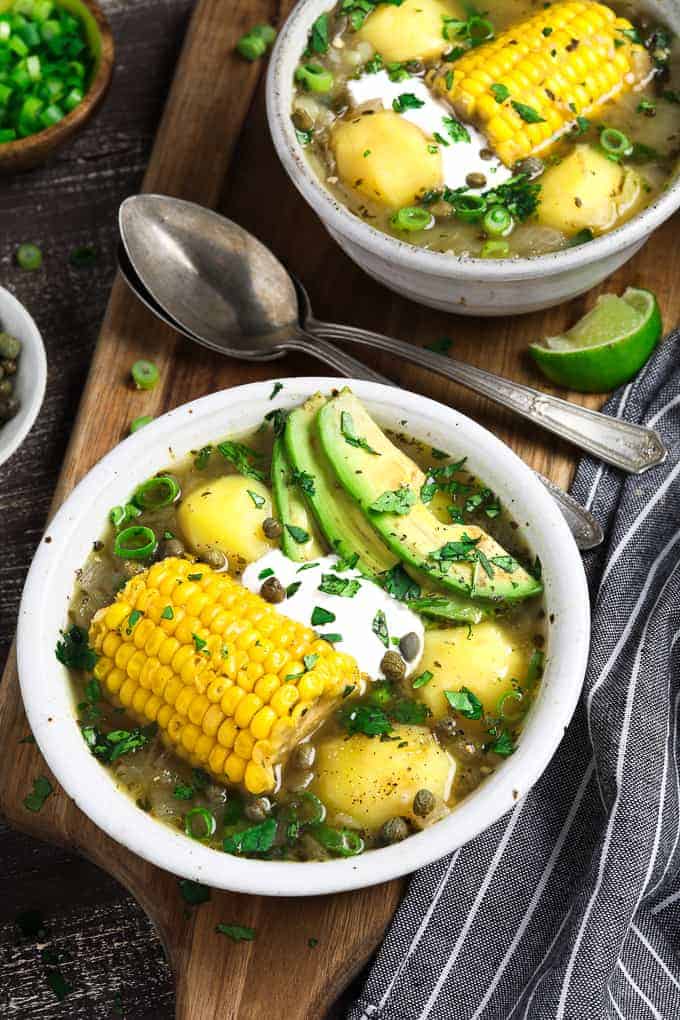 I’m a soupaholic and I love making a variety of soups all year round. They are inexpensive, super satisfying, great for make-ahead meals and freezable. Plus, you can feed a whole herd of people easily. Some of my go-to recipes are my Potato Leek Soup, this French Onion Soup, and of course, Vegan Ajiaco!

It’s a mouth-watering, hearty soup that is common to Colombia, Cuba, and Peru, and is prepared slightly different in each culture. The recipe I’m sharing today is a Colombian version (Ajiaco Bogotano). This soup is well-known throughout the region, and especially in Bogotá, the capital of Colombia.

Ajiaco is traditionally made with three types of Andean-grown potatoes, corn on the cob, chicken and a unique-flavored herb called Guascas. This herb is the star of the show, and it’s necessary to give this soup its one-of-a-kind flavor. (If you want to make the soup without the Guascas, you can sub it with thyme and bay leaf. It won’t have the same flavor as Ajiaco, but it will still be delicious and flavorful)

The potatoes range from waxy to starchy – Papas Criollas, Sabanera, and Pastusa. Each potato has a purpose, the starchy potatoes are cooked until they completely break down and create a stew-like consistency, while the waxy stay intact and provide another layer of texture. It’s the epitome of comfort food!

It’s really hard to find these potatoes in the U.S, but I’ve found Papas Criollas in a nearby Latin market in the freezer section. They are small, golden-yellow potatoes with a buttery, nutty, creamy taste and texture. If you can find them, I highly recommend trying them out at least once. They are a little expensive so most of the time I just use Fingerling or Yukon Gold to substitute them.

My favorite part of Ajiaco is all the fixin’s that accompany it. It’s served with Avocado, Capers, Table Cream (I use Vegan Sour Cream) and sometimes served with Aji (Colombian Salsa). Each topping adds another layer of flavor to this already flavorsome meal. I highly recommend all of them for the full Ajiaco experience. I also like to add a squeeze of lime and fresh-cut cilantro. 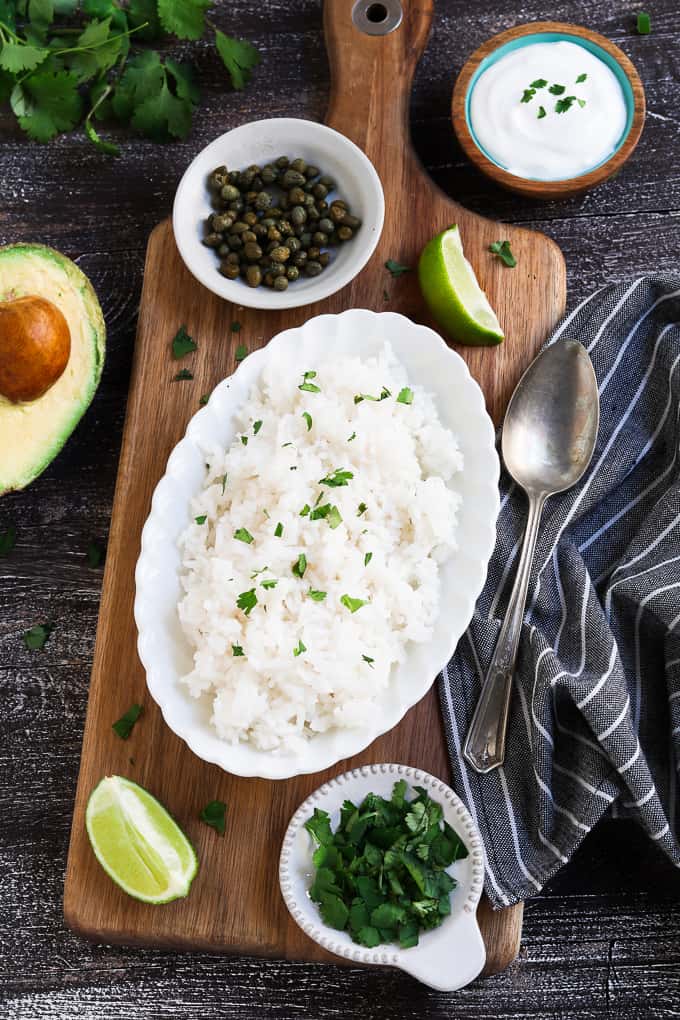 In many areas of the world, Guascas is considered a weed and is referred to as the Gallant Soldier or a Potato Weed. However, in South and Central America, it’s considered a culinary herb, and leafy vegetable with medicinal benefits. Fresh, aromatic Guascas is commonly used in Ajiaco, but it’s not readily available here, so dried Guascas is the next best thing.

It’s really hard to describe the distinctive flavor of Guascas and it’s like no other herb I’ve tried before. It really stands on its own. If I had to describe it, I would say it has an artichoke-like flavor, with an earthy undertone and a lime-like aroma. It creates a rich flavor and adds a lot of depth to the soup. You can find dried Guascas in most Latin markets or you can find it on Amazon Here. It’s really worth searching for and will give your Ajiaco its authentic flavor. 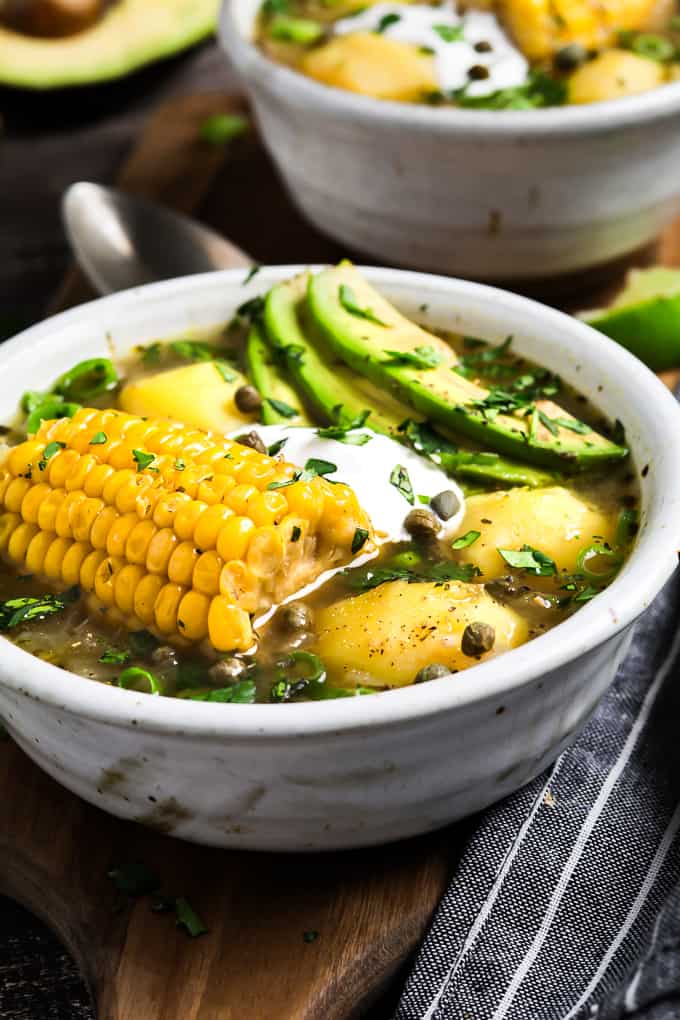 I tried to keep the recipe as traditional as possible, but I had to change a few things to make it vegan-friendly. The stock is traditionally made with chicken, and it’s simmered in water, onions, and garlic to create a broth. To replace this step, I sautéed the onions and garlic together and used vegetable broth. The cook time is much shorter without the addition of chicken, so that’s a big bonus.

I hope you guys enjoyed learning a little about Ajiaco and maybe you’ll give it a try. I’m looking forward to visiting Bogotá one day, and I would love to enjoy a vegan version of this incredibly delicious soup!

Looking for more comforting soup recipes? You may like these: 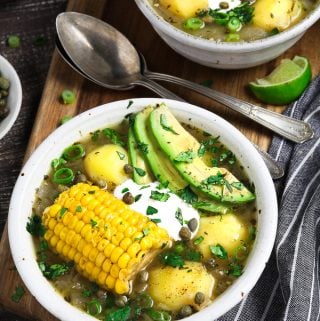 Melissa is the creator and recipe developer of the popular food & lifestyle blog, Vegan Huggs. It's a friendly and approachable environment for anyone who's curious about plant-based eating or cruelty-free living. Her blog is filled with comforting, familiar and easy-to-follow recipes that will fit into every household. Each dish is beautifully photographed in her own unique style with an inviting feel to them. Also, she has built a solid relationship with her readers and has a real understanding of what makes them return.