Make your festive dinner complete with this Vegan Holiday Roast. It's filled with savory stuffing and finished with a mouth-watering glaze. 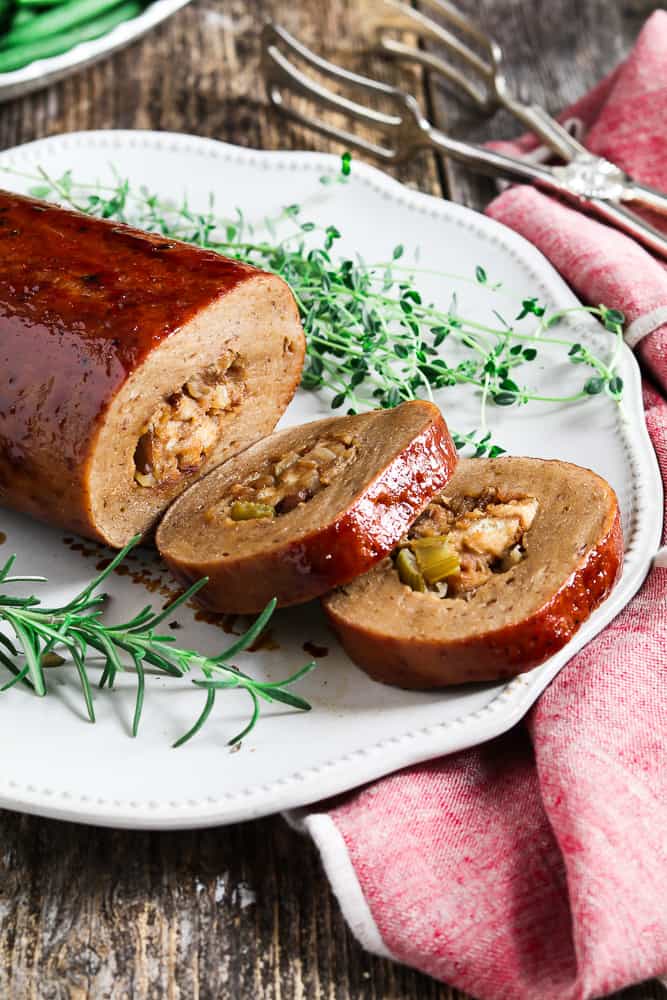 Let the celebrations begin!! I'm SO ready for some spiked nog and a nice sit-down dinner with family and friends. I can't wait!

I usually make my Meatless Loaf or Vegan Mushroom Lasagna for the main entrée, but this year I want to change things up with this Vegan Holiday Roast.

It's a succulent (seitan-based) roast that's stuffed with my Vegan Sourdough Bread Stuffing and topped with a subtly sweet glaze. It also makes a beautiful centerpiece that will impress your guests.

This recipe has a lot of steps, but it's actually quite easy to make, so don't be scared off. The hardest part is waiting for it to come out of the oven. I promise it'll be worth it though! Check it out...

How to make a Vegan Holiday Roast

(printable instructions and notes in recipe card below) 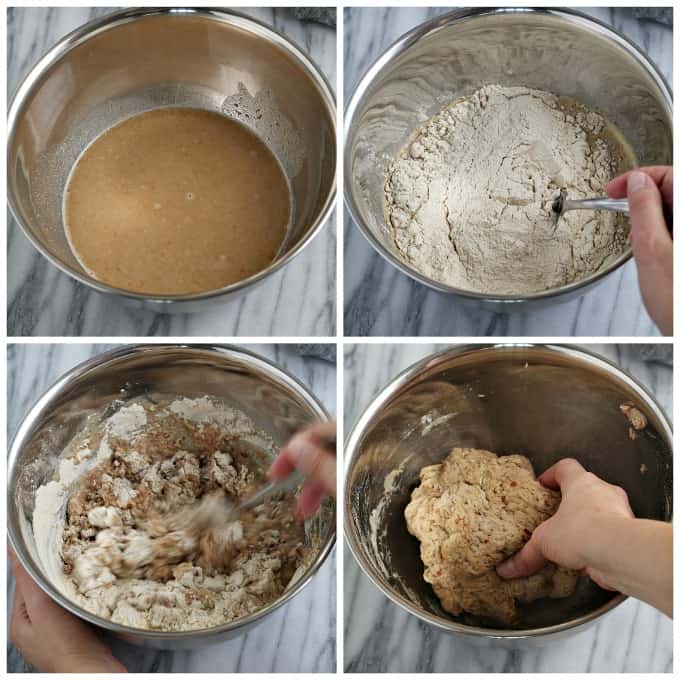 In a blender or food processor, blend all of the ingredients together until smooth (except the vital wheat gluten) and add it to a large mixing bowl.

Add the vital wheat gluten to the bowl and stir until a dough starts to form. Using your hands, knead dough until fully combined. The dough will feel thick and somewhat elastic. 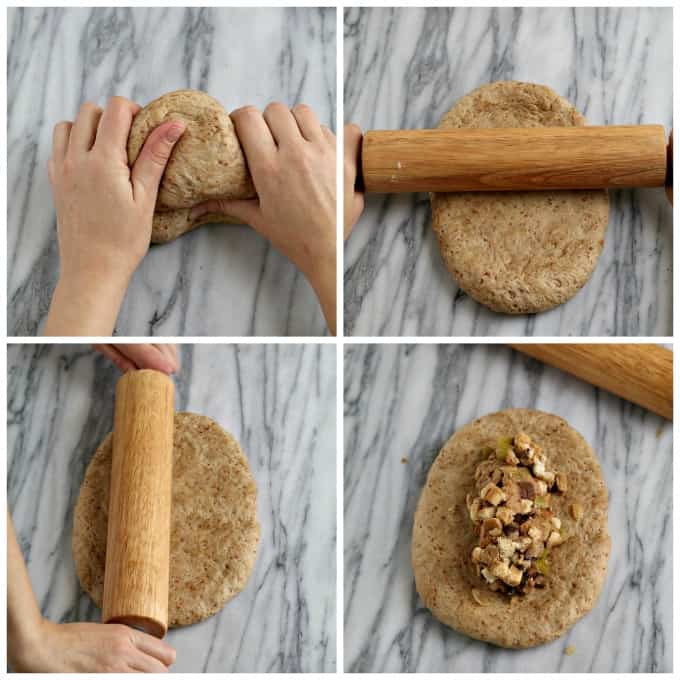 Knead for a few minutes more on a smooth surface. Now start rolling it out with a rolling pin (approximately 10x7). Roll from the middle outwards and repeat on the other side.

Roll both vertical and horizontal to stretch it out to the desired size. Using your hands, lightly pack the stuffing into a log shape and place in the middle of the dough. 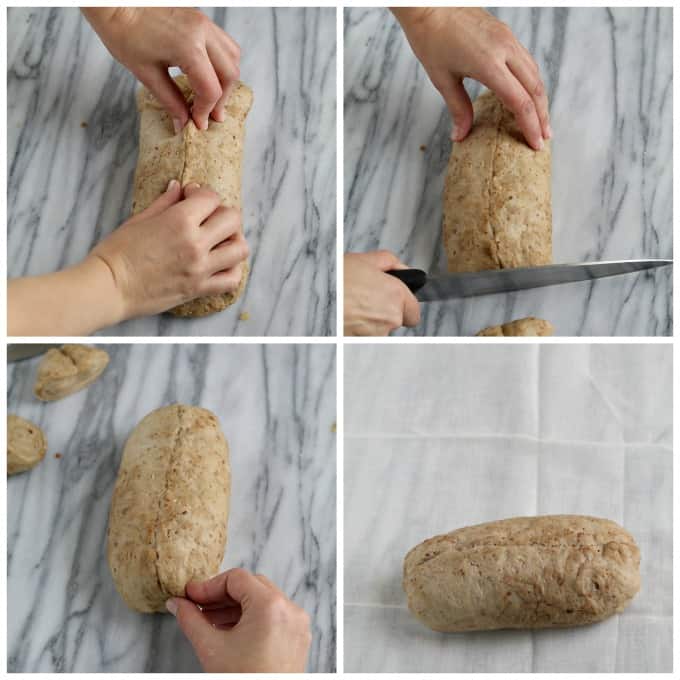 Bring both ends together over the stuffing and pinch closed. Continue to pinch the rest of the dough closed through the middle and ends. Pinch really well too avoid separation.

If there is extra dough at the ends, just trim it and pinch closed again. You want the stuffing to reach the ends to avoid a gap inside the roast. 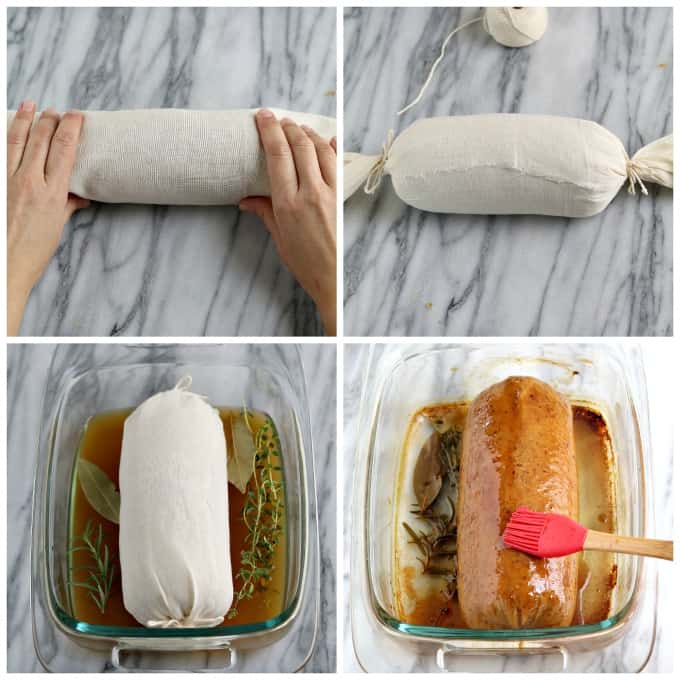 Spread out cheesecloth and tightly wrap the roast with at least two layers. Twist the ends and tie with twine. Place the roast in the casserole dish and add about 1" of broth on the bottom. Throw in some fresh herbs and bay leaves if preferred.

Bake for 1 ½ hours and rotate every 20 minutes for even cooking. Add a little more broth if it cooks off. Poke the roast to check to doneness - it should be firm. If it's still soft, then cook it a little longer. When it's fully cooked, remove from oven and unwrap the cheesecloth. Pour out the remaining vegetable broth.

Place back in the baking dish and brush the tops and sides with the glaze. Bake until the glaze becomes tacky (about 5 minutes). Fip the roast and glaze top and sides again. Bake about 5 minutes more. Remove from oven and let the roast rest for 10 minutes before carefully cutting with a serrated knife. 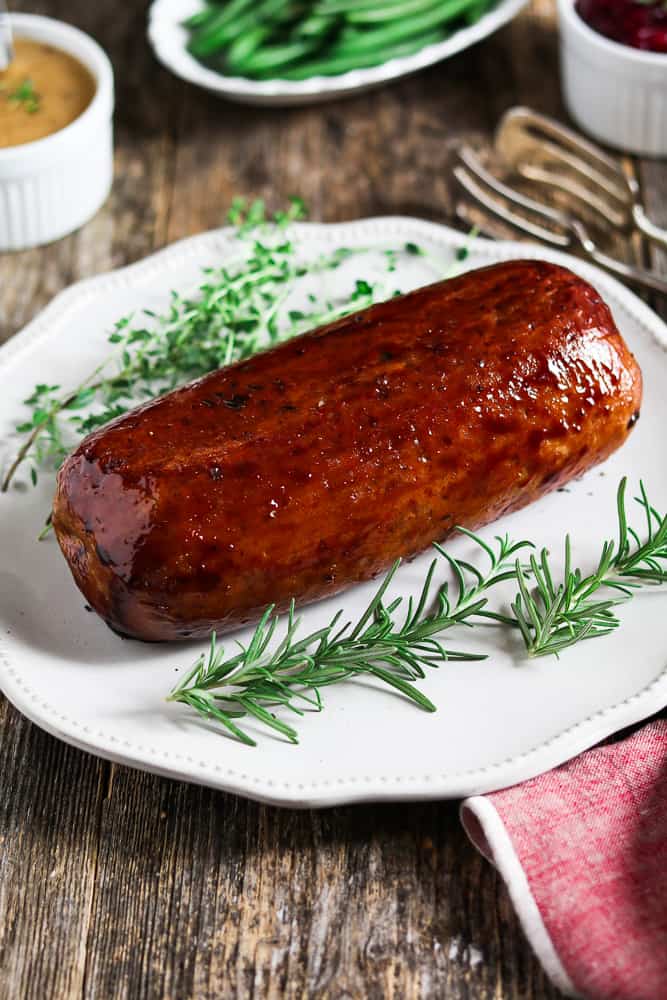 What should I serve with a Vegan Holiday Roast?

You can serve just about anything with this delicious roast, but here are some of my faves:

The best way to reheat leftovers

Preheat your oven to 350 °F (177 °C). Place the portion you'll be eating in a covered baking dish. It will get too dry if you leave it uncovered. You can top it with some gravy for extra moisture. Cook until heated throughout. 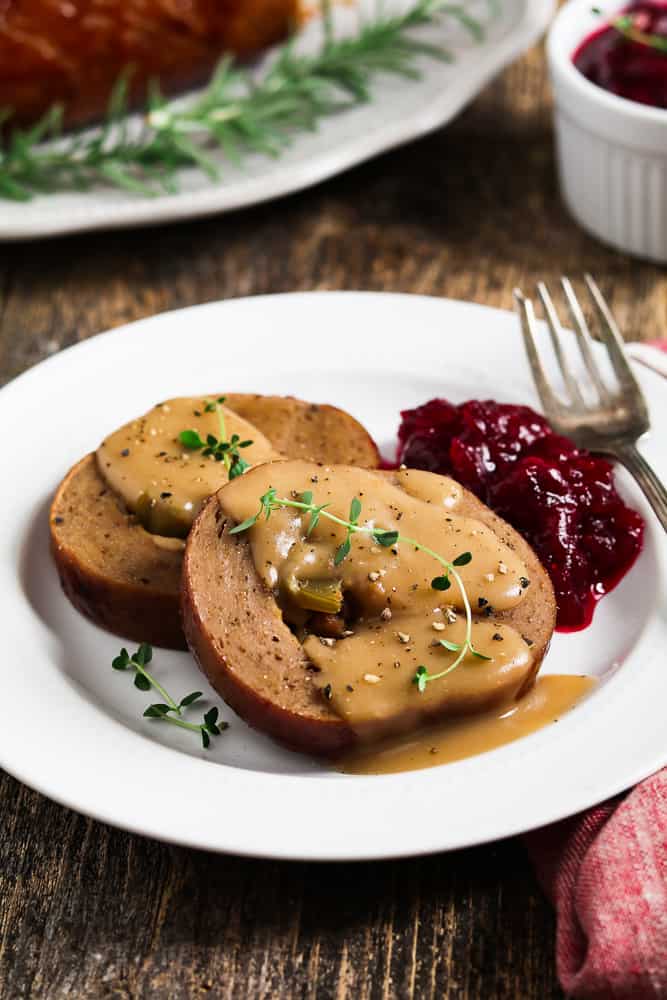 I'd love to hear from you

If you make this recipe, let me know what you think by ★ star rating it and leaving a comment below. It would really make my day. You can also follow me on Instagram and share your creation with me. Just tag me @veganhuggs and hashtag #veganhuggs so I don’t miss it. 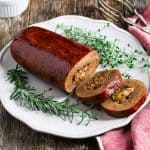