Vegan Fettuccine Alfredo ~ rich, creamy and buttery. It's a simple, yet luxurious dish, that can be yours in 30 minutes or less. 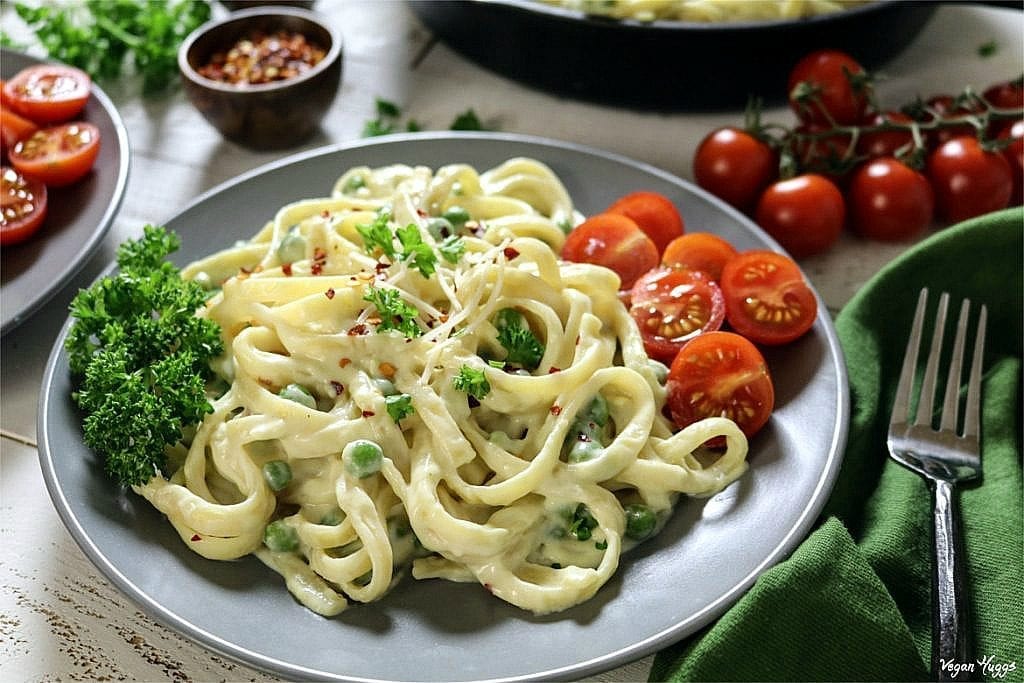 Valentine's Day is just around the corner, and I think this Vegan Fettuccine Alfredo would be the perfect romantic meal to have at home. When I think of Valentine's Day, I think of comfort food and nothing says comfort like a good ol' plate of creamy pasta.

So, I'll be cooking it up along with one of these 20 Valentine's Dessert recipes from my fellow food bloggers. I can't wait! 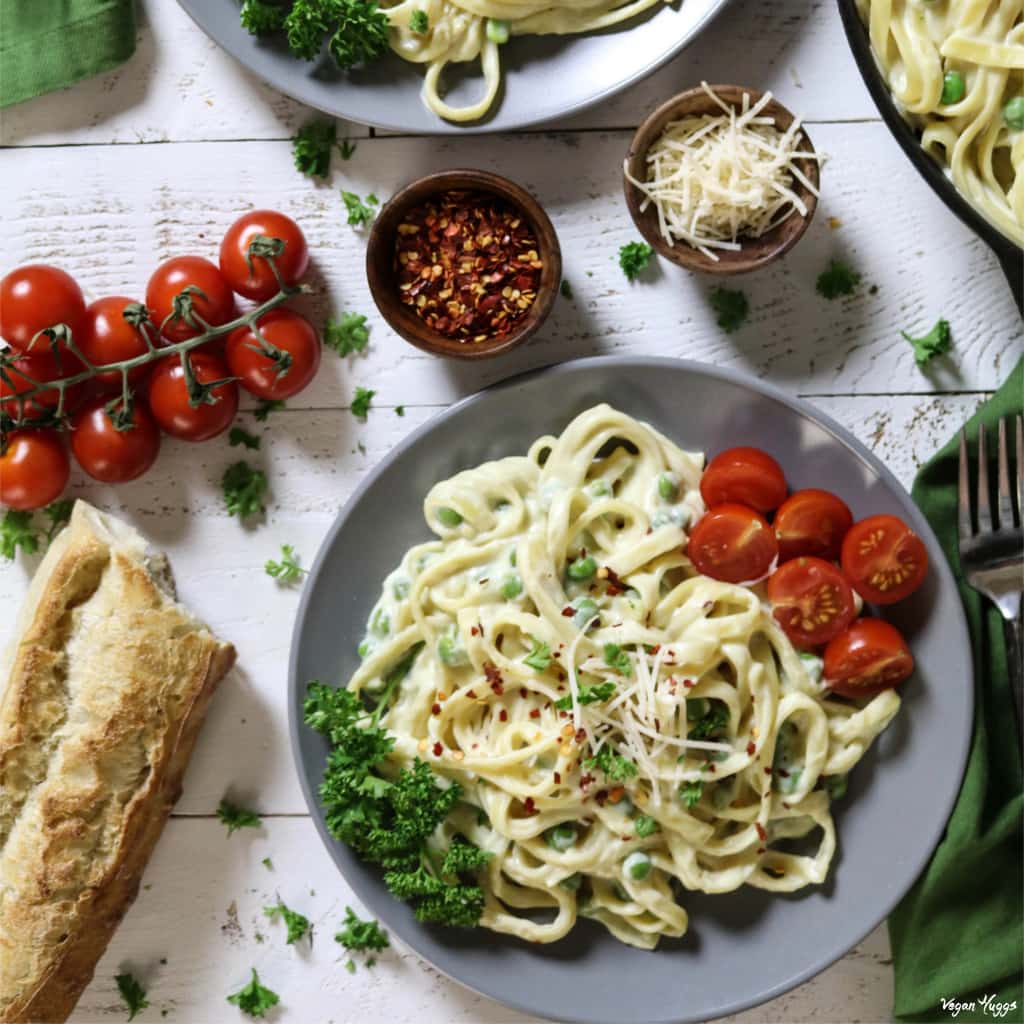 WHERE DID FETTUCCINE ALFREDO ORIGINATE FROM?

In 1908, an Italian restaurant owner, Alfredo Di Lelio created this recipe for his pregnant wife because she didn't have an appetite and was losing weight. She regained her appetite and fell in love with his creation. Per her suggestion, his recipe was placed on the restaurant's menu.

The original Fettuccine Alfredo recipe was called Pasta Bianco and wasn't made with cream. It was just simply butter, parmesan cheese and cooking water that was tossed over fresh-cooked pasta. The butter and cheese melt together to form a smooth cream-like sauce.

Years later, two famous Hollywood actors were in Rome on their honeymoon. They had dinner at Alfredo's and ordered the Pasta Bianco with the house-made fettuccine pasta. The pair thought it was the tastiest pasta dish they've ever had, and spread the word about Alfredo's creation amongst Hollywood's elite.

To thank Alfredo for his hospitality, they sent him an engraved silverware set and a photo of them. American Press caught wind of the gesture and published the story everywhere and Fettucine Alfredo was born.

Alfredo's restaurant now became a stomping ground for famous actors and started to draw large crowds outside. Each star left their photograph which became a part of the restaurant's decor and is still there today.

Local Italians stayed clear of this tourist attraction and were unimpressed by the butter and cheese dish. The popularity of Alfredo's grew and a few restaurants were opened up in the US. Over time, the American version of the dish changed from simple butter and cheese to a creamy rich sauce, which ironically isn't the best tummy ache healer. 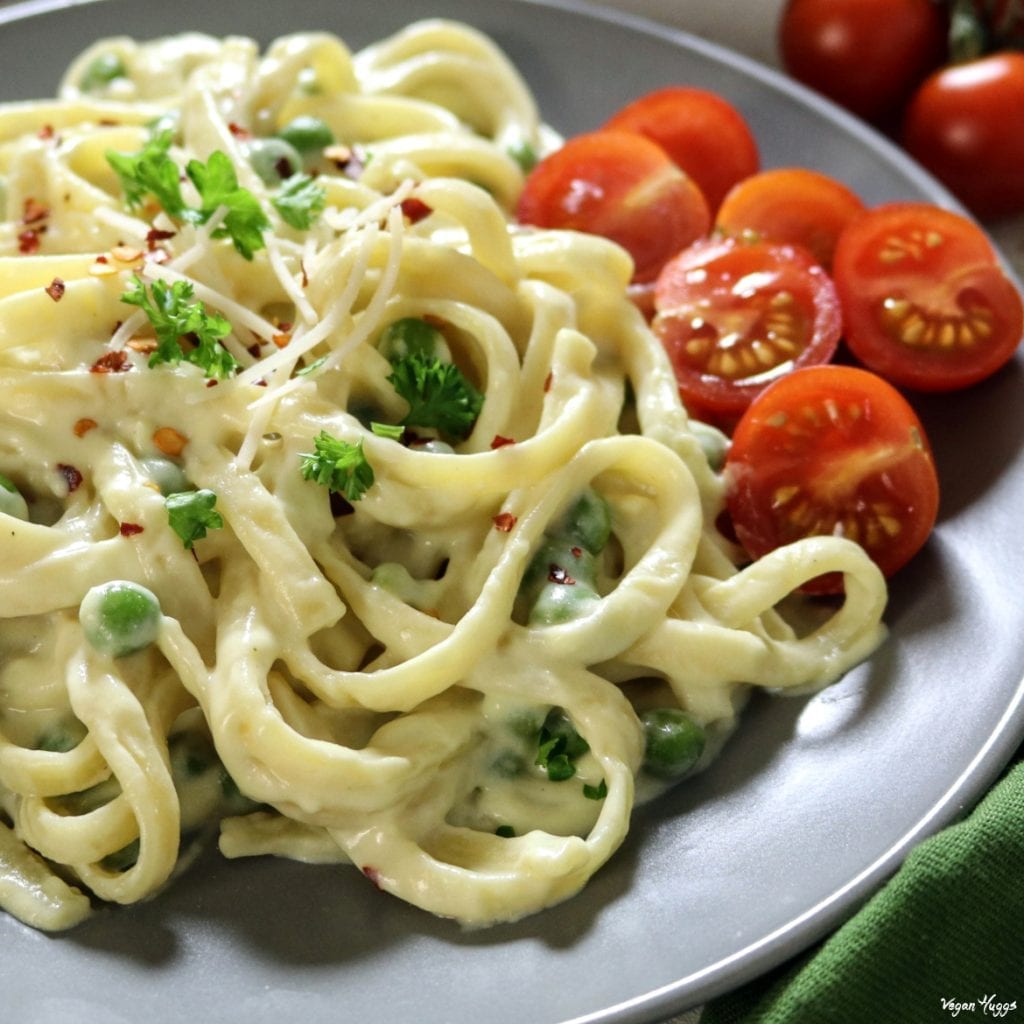 I grew up with the Americanized version of Fettucine Alfredo, and it would be my first choice on the menu while dining out. I just loved that super cheesy and creamy sauce, but over the years I would order it less and less because it would really hurt my tummy. After going vegan, I realized that humans were not meant to consume dairy.

Well, just because vegans don't consume dairy doesn't mean we can't have any fun. This vegan version is just as creamy and cheesy as the Americanized version, but it will leave your tummy much happier afterward.

To replace the heavy cream, I used very simple and wholesome ingredients. I used unsweetened soy milk, raw cashews, and potatoes. The potato part might sound weird, but it really helps thicken the sauce and makes it creamy and velvety. Plus they are good for you!

To enhance the cheesy flavor, I used nutritional yeast and fresh lemon juice which adds a subtle zing to every bite. Then for added savory flavor, I used vegan butter, fresh garlic, vegetable broth, and seasonings.

I tossed it all with fettuccine, peas and topped the dish with fresh-cut parsley, cut tomatoes, and vegan parmesan cheese. SO good! 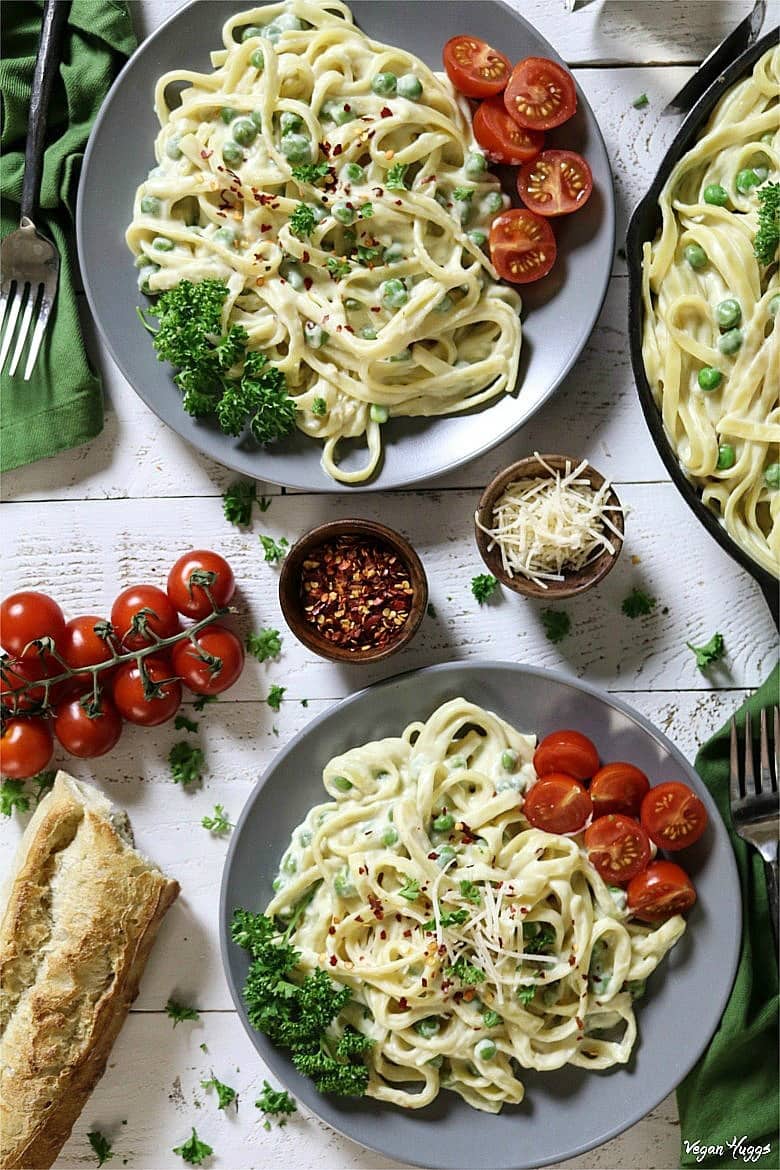 HOW TO MAKE VEGAN FETTUCCINE ALFREDO

STEP 1 - Boil 2 small potatoes and cashews about 8-10 minutes until softened.

STEP 2 - Now cook the fettuccine in a large pot of salted boiling water and cook it until al dente. Drain and drizzle the pasta with olive oil to prevent sticking. I usually start the sauce 5 minutes before the pasta will be done. This way it's not sitting too long and it will be hot and fresh when it goes into the sauce.

STEP 4 - For the sauce, place potatoes, cashews and remaining ingredient (except the garlic and butter) into a high-speed blender. Blend on high until the sauce is completely smooth then set aside.

STEP 5 - Heat up vegan butter in a large pan over medium heat. When melted, add minced garlic and sauté for 30-60 seconds until lightly brown and fragrant. Pour cream sauce into the pan and cook for 3-4 minutes until sauce slightly thickens up. Add pasta and thawed peas to the pan and gently toss to coat. Serve immediately. 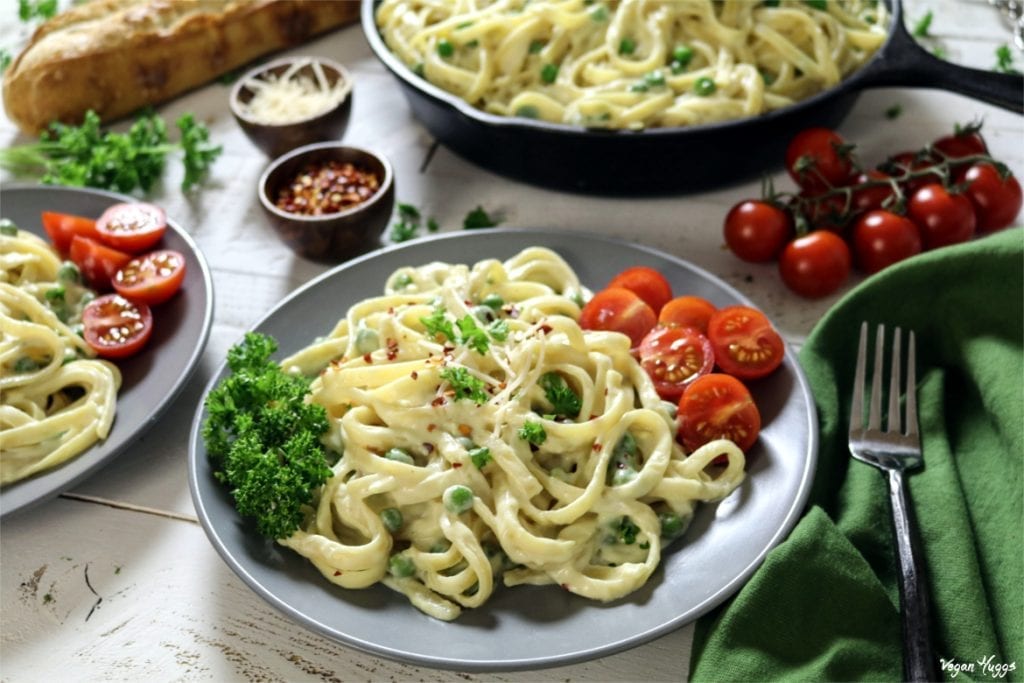 And here are 30 more delicious Vegan Pasta Recipes by Vegan Heaven. I'm literally drooling over all of them!

If you make this Vegan Fettuccine Alfredo, let me know what you think by ★ star rating it and leaving a comment below. It would really make my day. You can also follow me on Instagram and share your creation with me. Just tag me @veganhuggs and hashtag #veganhuggs so I don’t miss it. 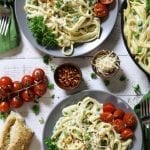